Life has been a roller coaster in the past few years, and not necessarily in a good way. With so little time on my hands I was unable to keep this blog updated. Though I still visit Palmer Lake Park sometimes, my horizons have expanded and it's not always my first choice anymore.

So since a lot of my birding and nature photos are from places other than Palmer, I finally did start a new nature blog in February of 2021. I had intended to add this post quite a while ago, redirecting any readers to my new blog and somehow I just totally overlooked it until now.

I can't promise this new blog will be updated any more frequently, BUT I definitely have some content here from 2021 that you might enjoy.

Posted by PalmerLakeGuy at 10:28 PM No comments:

It was another cold day at the park this Sunday morning. I really didn't see much until I came to the southwestern corner of the park where I could hear all the Mallards quacking even before I got there. I figured I would spend some time looking among them in hopes of maybe finding an American Black Duck which is an entirely different species. It didn't take long before I noticed an unusually dark looking duck. After seeing it's wing patch or "speculum" I could see it was missing the wide, white border that is present on Mallards. 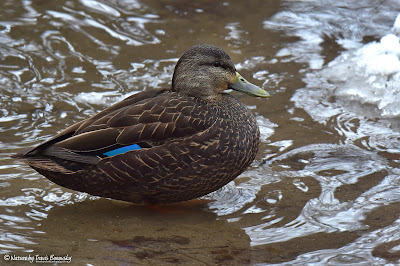 It's funny how predictable they have come to be here each winter. I am learning more all the time about Black Ducks and one thing in particular I am learning is that a high percentage of them have Mallard genes, meaning the two species commonly interbreed. In fact someone pointed out in one of these photos that there IS still the tiniest sliver of a white border on the wing patch, something that should be completely missing on a pure American Black Duck. Knowing this now, it's more apparent that the vast majority of Black Ducks I have spotted thus far have not been 100% pure American Black Duck. Maybe a few have but they would actually be the exception to the rule it seems. 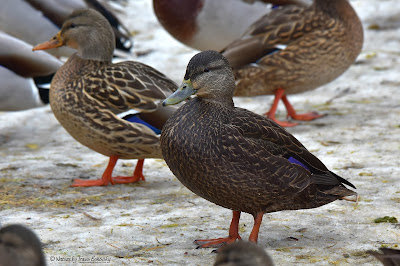 Whenever I do see one that I suspect has at least some Black Duck genes, I find it helpful to get a photo of them next to a regular Mallard for comparison. My second photo here shows just that. There was one other odd looking duck in the group today who seemed to possess the qualities of maybe more than two different species! One term I've learned over the years that is often used to describe such ducks is a "Manky" Mallard. Manky is a British term that generally refers to a wild duck that has bred with a domestic duck. 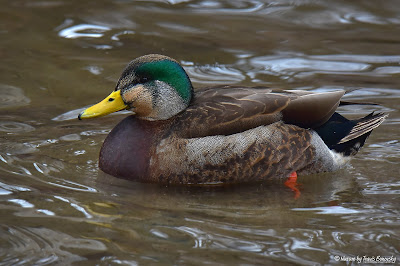 Which is exactly what I thought I had here. BUT after sharing the photo with other bird watchers, their consensus was simply another Mallard x American Black Duck hybrid. So probably two wild ducks and not necessarily any part domestic, thus not really a "Manky" Mallard. I've found a LOT of variable ducks over the years and I find them to be a confusing yet very interesting topic. Every time I think I know what I'm looking at, I find out I'm not as versed as I think I am. Oh well, they are certainly fun to guess at! Here is an interesting online source I stumbled upon some time ago: http://www.10000birds.com/manky-mallards-domestic-feral-or-just-plain-odd-mallards.htm Later on I spent some time trying to relocate the Northern Shrike from last week but could not find it.
Posted by PalmerLakeGuy at 10:16 AM No comments:

It was hard to find much of interest today at the park but as I came around to the north end I noticed a bird perched high up in a tree a long ways ahead of me. It kind of stuck out and caught my attention and I quickly realized it was a Northern Shrike. 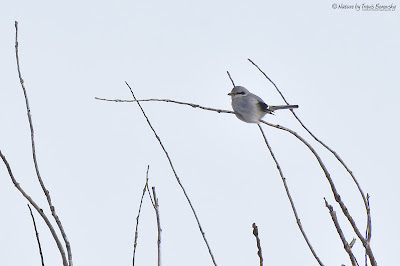 I feel like I used to see a lot more of them in the area and it's been some time since I've found one here. A friend of mine mentioned to me that she had been seeing one on the north side over the past couple of weeks. I took some shots and then moved closer but unfortunately the bird immediately flew off a long ways and it was the last I saw of it. Other birds seen today were common variety; Hairy Woodpecker, Black-capped Chickadee etc. I also noticed some strange looking "rainbows" on either side of the sun, something known as a Sun Dog. This is caused by the refraction of sunlight by ice crystals in the atmosphere. They seem fairly common in Minnesota winters, especially in January and February. 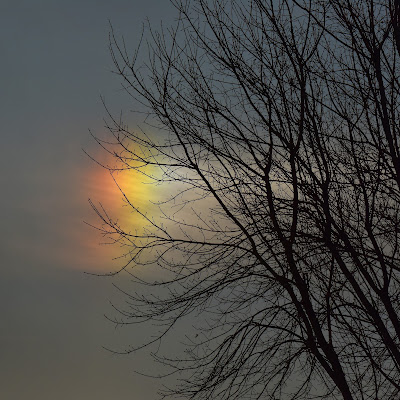 Posted by PalmerLakeGuy at 10:13 AM No comments:

Not much to write about but saw a nice female Wood Duck on the east side on the little ponds. Her plumage really showed off nice in the low sun. 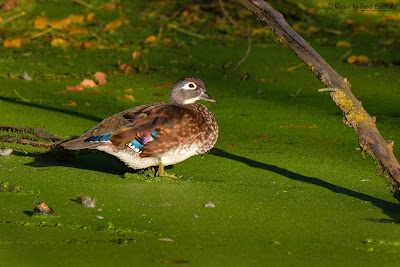 Also paused to photograph a Wild Cucumber fruit. These are actually native plants though they tend to creep and spread over wide areas. And I also saw a female Northern Cardinal on the east side as well. 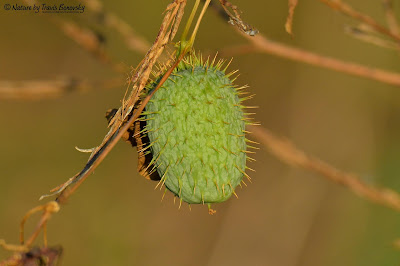 Posted by PalmerLakeGuy at 6:10 PM No comments:

Older Posts Home
Subscribe to: Posts (Atom)
Click here for maps of the area!
MILES WALKED AT PLP: 1,652
Estimating that I walk between 1 and 3 miles per visit, I am tallying up the appropriate mileage based on each post to this blog.

Friends of Palmer Lake Park are an organization of citizens wishing to protect, preserve and enhance this natural area and connect people to nature through education about the birds, plants and wildlife found within. Contact us at via email or click on our facebook link below!